Doing It Right: The Simon Foundation 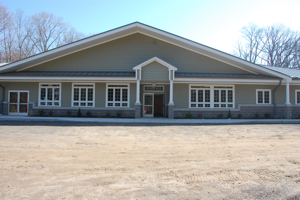 As we were walking down the line of spotless kennels, each one with a dog in it, Mark Greenberg paused by one of them. In it was tan dog, very lively and exuberant.

Mr. Greenberg offered the dog his hand. The dog immediately calmed down, as if he had been waiting in the dark watches of the night for a familiar presence. Finally satisfied, the dog reverted into his usual mode but, as I thought, with a sprightly bounce in his step. His tail was wagging merrily.

The kennel manager, Lisa Agresti, was beside us. We had just toured the inside of the kennels, all of them shining like new pennies, and even now in the late afternoon, smelling of water, a hint of disinfectant hanging about walls of the Simon Foundation in Bloomfield.

“Would you like some ear protection?” Ms. Agresti offered. “It can get a little loud in here.”

I waved away the suggestion. Half way down the hall of kennels I was beginning to have second thoughts. As soon as the dogs caught a whiff of us, they set up a clamor, the kind of raucous noise one might expect at the foot of a besieged castle. Each dog knew the manager. She paused at several kennels. A story of one kind or another, few of them pleasant, was attached to each of the dogs like a vanishing doom, some of the tales bitten off by the barking.

Now we were outside, in a large grassy courtyard, examining the kennels from a different angle. The front door to the kennels opened to the long hallway we had just traveled; the back door opened to a spacious grassy courtyard. Off in the corner near a wooded area was a fenced in rectangle that looked from a distance like a large enclosed tennis court.

“Do they roam free there?”

“No. None of the dogs is ever off leash. They are always with the handlers.”

Before adoption, all the dogs, each lovingly cared for, are pre-trained. On route, we had passed clean, well lit grooming rooms, a large inside training courtyard where the dogs were socialized and made, as Mr. Greenberg put it, “kid friendly.”

“Where do you get the kids?”

With a wry smile, Mr. Greenberg pointed to his animated son, a curly haired blond lad then frolicking among two dogs he had befriended. Inside the large training-socialization room, was an older dog, a professorial look about him, set apart in a room partitioned with glass, watching the frolic with lofty indifference from a waiting area. Staff was everywhere, grooming, walking the dogs, cleaning, training. Mr. Greenberg bent down to the tan dog.

“This one,” he said, “is now doing very well. He was a particularly bad case when he came to us. He was repeatedly stabbed and came to us full of holes. He looked like someone had been using him as a dart board.”

Thinking a firing squad might be appropriate, I asked Mr. Greenberg, “Do they know who did that?’

He shrugged his shoulders. “You never know.”

Many of the dogs rescued by the Simon Foundation come from pounds. The foundation pulls from Watertown, Bristol, New Haven and Windsor, houses the Hartford and Bloomfield pounds, and is capable of intervening quickly in extraordinary cases. The town of Canton recently asked the foundation for help when upwards of forty dogs, many of them malnourished, were discovered living in substandard conditions. A team was immediately dispatched, the dogs were tagged and veted, and 18 of them are now residing at the foundation. Nearly all pound dogs have an inescapable death sentence hanging over their heads. Pounds generally keep dogs about eight days after they arrive, after which they are euthanized.

At the point at which the dogs arrive, their owners have long since disappeared behind an impenetrable veil. In some cases, they had never accepted ownership of the dog. In other cases, they had been unwillingly forced by circumstances to give the dog up. And, in some cases, the dogs and cats had been abused, bearing upon their bodies the marks of human depravity, the stain of inhumanity, their former masters now collectively referred to as the nameless “they” we invariably use when speaking of incomprehensible cruelty.

Of course, no one at the Simon Foundation – not the kennel manager, not the trainers, not the dog handlers who daily walk the dogs, not the groomers, not Linda Greenberg, who had played no small part in pulling the Simon Foundation from the imaginations of both herself and her husband -- is interested in recriminations.

They are interested in rescuing dogs and cats and placing them in what they call “a forever home.’

President Harry Truman is credited with having said “If you want a friend in Washington, get a dog.” Mark and Linda Greenberg have had over the years hundreds of friends.

As we are chatting in the entrance to the foundation, amid cats prowling behind glass enclosures -- one of which, a sleek, short haired mother, had recently given birth to a litter of four – Mrs. Greenberg dances in, cradling a chocolate lab mix, very frisky, lapping at her face and seeming to attend to her message as she tells Mr. Greenberg excitedly that she had already placed the dog, which had arrived at the Simon Foundation only a day earlier. The foundation has just celebrated its 100th placement since January.

Someone, a satisfied customer who had accepted a dog some months earlier, told her at the time he took home his dog that, if she could find him a young brown dog, he would be interested. The dog, with a little chip of a scar on his forehead, had arrived, she made the call, and his new owner would be coming by within the week.

The future owner of the dog had already been interviewed in one of the rooms in the receiving area of the foundation, a process designed to match the animals with those who adopt them, in the course of which needs are assessed and satisfied before the dog is placed. In the case of the chocolate lab, the process would be hastened. In and out – just like that. It doesn’t happen this way that often.

The story of the Simon Foundation is, in many ways, the story of every business. Businesses usually begin with the perception of a felt need and varying attempts – halting at first, later perfected, after much trial and error – to satisfy the perceived need. Along the way, if the need has been sufficiently answered, the business may be successful; it may make money, or not.

It should be noted that the foundation did not flower from a bitter root of greed. Very few successful businesses do. No one at the Simon Foundation is making a pile of money. A bit like Blanche DuBois in the Tennessee Williams play “A Streetcar Named Desire,” the foundation depends upon the kindness of strangers and gratefully accepts donations. To raise additional funds and defray costs, the foundation offers ancillary services – grooming, the boarding of pets when their owners go on vacation, training programs, and the most nutritious dog and cat food for sale in the area.

Long before the Simon Foundation in its finished form was but a glint in the Greenberg’s eyes, the couple had found Triboro, an abandoned German Shepherd, running along the Triboro Bridge in New York. Yankee the cat was discovered outside Yankee Stadium. Eggy was exploring a garbage can outside a Chinese restaurant when she was rescued by the Greenbergs. Ashley, riddled with bad habits, was adopted after Linda had read an ad in a newspaper. But Ashley’s imperfections were sweetly ingratiating, and later, after generous dollops of love and affection, even Ashley succumbed to the patient care of the Greenbergs.

Both of them kept collecting cast off animals. At some point, the Greenberg’s home became crowded. Surveying the Noah’s Arc of abandoned and rescued animals, one of the two whispered, “We need a bigger house.”

But it was Simon, another German Shepard, that turned the trick. After Simon arrived, the Greenbergs purchased a larger house with a more accommodating back yard. And the little mustard seed grew and grew and grew.

Over the years, the foundation evolved, as these things often do. Mark and Linda had been caring for the animals, posting photos and bios on Petfinder and hand delivering every adopted pet to their newly found homes. Capacity had been a problem from the first. The Greenbergs needed a piece of land to accommodate their vision of a world class rescue facility. The Simon Foundation in Bloomfield now offers to animals that have been abused, abandoned, neglected -- in some cases facing euthanasia -- a sanctuary where they can live out their lives in peace or, as often happens, find a permanent home with caring people whose hearts are larger than houses.

“Oh yes,” the manager said. “They all must be named to be trained.”

Naming things, from time immemorial, has been a way of owning things; it is the way the heart, even a heart of darkness, embraces the world. We name our children before they are born so we can call them home to our hearts.

“Miracle,” she said, adding, “he probably will not be placed. We’ll take care of him here. This will be his home.”

Perfectly fitting, too: Every home should have a miracle in it.

The Simon Foundation is located at 89 Dudley Town Road in Bloomfield. Adoptions of dogs and cats include a six week training class and a home visit by staff. The foundation strives to place animals in homes that offer the greatest likelihood of success and permanency, and every animal placed is appropriately spayed or neutered and vaccinated. Dogs are trained on site to respond to the usual commands: stay, down, come, leave it, heel and go to bed. Further information is available at The Simon Foundation site or by calling 860-519-1516
Posted by Don Pesci at 7:45 AM